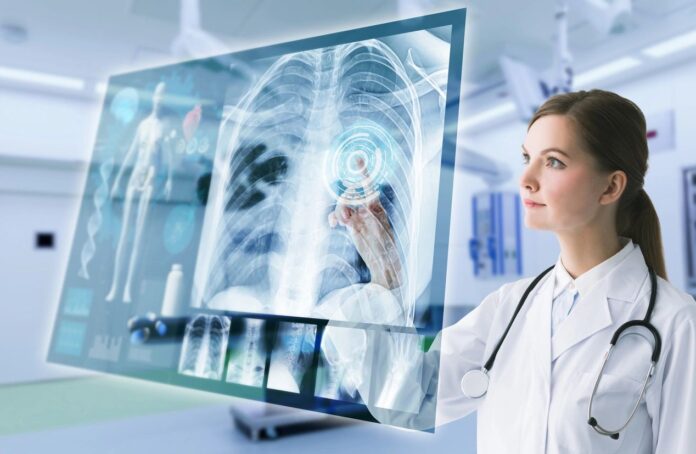 An aortic aneurysm is a dilatation of the aorta which predisposes itself to rupture, hemorrhage and death in short order. The aorta is the largest vessel in the body carrying blood out to the rest of the other organs. There are three layers in the aorta—intima, media and adventitia. A true aneurysm is a dilatation of all three of these layers. When an aortic aneurysm ruptures, there is only a short time frame to emergency surgery to repair it before death ensues.

Aortic aneurysms are usually silent killers in that most (almost all that involve the abdominal part of the aorta and half that involve the upper or thoracic part) are generally asymptomatic. A physical exam may detect a pulsatile mass in the abdomen that corresponds to an aneurysm that hasn’t yet ruptured, but the majority of aneurysms are discovered on more routine imaging. Chest X-rays or ultrasounds are the most common detection methods. Symptoms of a large aneurysm may include low back or mid-abdominal pain or trouble swallowing when the aneurysm compresses the esophagus. Once the aneurysm ruptures, chest pain is sudden and severe along with a sharp drop in blood pressure and throwing up or coughing up blood. Death is common when there is not proximity to a hospital or operating room, and even surgical morality in an acute situation may be as high as 50 percent.

Risk factors for aortic aneurysms are many. Men over age 65, hypertension, smoking and high cholesterol are a few of the major ones. Others include weight lifting, trauma, a bicuspid aortic valve or any other kind of aortic valve disease. Genetic causes including Marfan’s syndrome (a particular offender), Ehlers-Danlos syndrome and Turner’s syndrome are widely recognized. Inflammatory diseases such as ankylosing spondylitis, giant cell arteritis and Takayasu arteritis cause weakness in the aorta through their underlying inflammatory component and screening for an aneurysm may be part of the disease for these conditions work-up per se.

How to treat an aneurysm when discovered in an asymptomatic person has undergone changes in recent years, but is still designed to get to the aneurysm and surgically repair it before it is too late. That said, not every discovered aneurysm is referred immediately for surgery. Things that go into when to make the repair are time since discovery, size of the aneurysm, underlying conditions (like atherosclerosis, hypertension and smoking) and the rate of growth of the lesion. Clinical problems are rare when the aneurysm is 4 cm in size or less. Between 4 and 5 cm, the mortality rate increases but again surgery is not an immediate consequence. Once the aneurysm measures 5.5 cm (this is an increase from the previously accepted 5.0 cm) or the growth is marked in between radiographic evaluations, surgery to accomplish repair is undertaken. As mentioned, this is not an operation with trivial surgical risk, so repair is accomplished in those with larger lesions. The annual rate of rupture is highest in the larger lesions and a rupture may be fatal in up to 80 percent of these cases.

Surgery is usually accomplished as an open repair of the aorta. It must be done in skilled hands as the aorta then certainly is a weakened vessel subject to further problems if not done effectively. As it is a problem in older individuals, a procedure called EVAR (endovascular aortic aneurysm repair) is done in older individuals who are considered high operative risks due to the presence of other complicating diseases or circumstances. It requires indefinite surveillance to monitor for leaks, closing of the vessel or re-expansion even though it is safer for high risk individuals.

Underwriters who assess aortic aneurysm look for various factors in assessing its future morbidity and mortality. The location of the aneurysm is important, as well as the size, cause, treatment, and rate of growth if unoperated. Monitoring control of other contributing conditions is important as well, both in the operated and unoperated individuals. Follow-up is also key— those who do not have adequate medical follow-up with this condition increase their mortality several fold.

Smaller aneurysms may be taken with a small rating as long as follow-up is good. Larger ones have to be followed with care to assess stability, as their rate of growth may pre-dispose them to acute injury and death if a rupture occurs and an operating room is not immediately in reach. There may be a waiting period of six months to a year before insurance is considered after surgery, and the longer time goes by without a recurrence the better. Those with EVAR as treatment are rated more severely as the procedure for repair is not as complication free and there are generally other health problems that were significant enough to have chosen that approach over the more tested open repair.