When I was seven, I sat on the floor in my friend Marin’s basement. I was listening as she described a place called Camp One Step. It was an exclusive place for children with the misfortune of having cancer. Both Marin and I are cancer survivors, and she was trying to convince me to go to this cancer camp. I remember sitting there quietly thinking, “Why would I want to spend two weeks surrounded by a bunch of bald kids who would be throwing up into buckets all day?” However, after hearing many stories, Marin finally convinced me to go.

The following summer I clung to my mother’s arm as we walked up the steep steps to the camp check-in office; I was scared out of my mind. Before I went to Camp One Step I was a quiet child who never spoke of my cancer because I was almost embarrassed by it. I never showed my surgical scars or talked about the many hospital visits because I knew that the other kids would label me as the girl with cancer. My close friends knew the gist of my story but they still never could understand what it was like. Camp One Step changed all of that.

Back when my mother Pamela was pregnant, the doctors noticed something wrong with me during an ultrasound. My mom was induced into labor three weeks early so they could assess the problems I was facing. Unsure of what was wrong, doctors performed exploratory surgery when I was three weeks old. They found a tumor the size of a softball in my left adrenal gland. With a few tests, they discovered that I had Neuroblastoma stage 4s. Neuroblastoma is a very rare type of childhood cancer that develops in nervous tissue outside of the central nervous system. My amazing doctors at the Children’s Hospital of Wisconsin were able to remove the tumor in my adrenal gland. However, when I was thirteen months old, they discovered that I had hundreds of tumors in my liver. I had another surgery, and the doctors removed half of my liver. Thankfully, my liver grew back. After my second surgery, I was tumor free.

Seven years after my surgeries I came to Camp One Step. I remember almost crying when my parents left after dropping me off. On the first day, I was too shy and scared to talk to anyone. This was partly because two of my counselors had prosthetic legs and I thought they were robots. By the second day I accepted the fact that no one was a robot, they were simply just kids who had gone through similar experiences as my own. Camp One Step has not only helped me come out of my shell, but it has helped me realize that my cancer is not something that I should be ashamed of. Camp has allowed me to make the greatest memories and find my best friends. I can not be more thankful for what camp has given me over the years.

I have been a camper for twelve years and it is still my favorite place on earth. Truly, I cannot imagine what my life would be like without this place. This camp is a second family for everyone that comes. We can all relate to one another in a way that is strange to most. But that is what makes our friendships so unique and special. Every child is able to open up to someone and not be judged for what they have gone through. Even if we have not seen our friends in a month, six months, or even a year, we all know that we are always there for each other. The bonds made at camp are unbreakable. Camp One Step has truly given the world to every child that comes through their doors. Camp One Step has given me a chance to experience things that I never thought I would—whitewater rafting, horseback riding, rock climbing, skiing in Park City, UT, and even talking to Congress in Washington, D.C.

While camp offers us a tremendous amount of fun and good times, we are also forced to face some difficulties. Since this is a program for not only cancer survivors but children still going through treatment as well, problems can occur. Relapses, depression, and even friends passing away sadly sometimes happens. For some campers, Camp One Step is the only place that they feel unashamed of their scars, baldness, prosthetics, and ports. No matter what someone is going through or what has happened we will always be by each other’s side.

This is why I am also extremely thankful for all those involved with the NAILBA Foundation. They have given so much to Children’s Oncology Services and Camp One Step. Over the last 40 years Camp One Step has been able to serve 16,500 campers. Every donation allows for more and more children to become part of the camp family. Much of the growth started seven or eight years ago when the NAILBA Foundation awarded Children’s Oncology Services a generous grant. Recognized by Charity Navigator as a 4-Star charity, Camp One Step has helped every camper in a different way and has truly found a special place in each of our hearts. Some of those campers were able to come to camp thanks to the donations of NAILBA members and the NAILBA foundation. This foundation has allowed kids with cancer to come to camp where they can just be a kid again.

Today I am nineteen years old and almost ten years cancer free. I just finished my freshman year at Northern Michigan University where I am majoring in multimedia journalism with a double minor in international studies and photography. Sadly, this upcoming summer will be my last year as a camper at Camp One Step. However, I have never been more excited to become a camp counselor and to give back to the place that has given me the world. 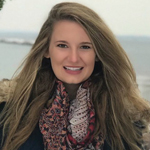 Hannah Smith is a nineteen year old soon to be sophomore at Northern Michigan University where she is majoring in multimedia journalism with a double minor in international studies and photography. While still in the womb she developed Neuroblastoma stage 4s. Thanks to the amazing doctors at the Children’s Hospital of Wisconsin, and after several surgeries and numerous treatments, Smith is almost ten years cancer free.

Smith has been a camper at Camp One Step for twelve years. Camp One Step, run by Children’s Oncology Services and recognized by Charity Navigator as a 4-Star charity, is a program for both cancer survivors and children still going through treatment—not only a place that allows kids with cancer to come to camp where they can just be kids again, but empowering children who have been diagnosed with cancer to find new hope and believe in a brighter future. Over the last 40 years Camp One Step has been able to serve more than 16,500 campers. Much of the growth started when the NAILBA Charitable Foundation awarded Children’s Oncology Services a generous grant.

This summer will be Smith’s last year as a camper at Camp One Step, however she has never been more excited as she works to become a camp counselor and to give back to the place that has given her so much.

Hannah Smith is the daughter of Mike Smith, CPS Horizon Financial, Hales Corners, WI. Comments or questions for the author can be directed via email to mike@cpshorizon.com.