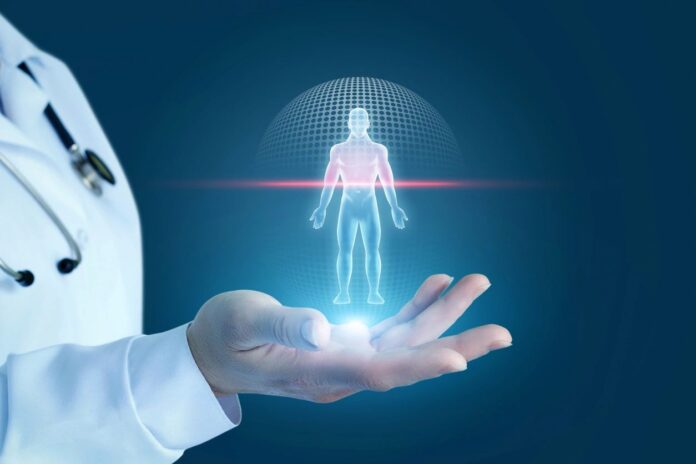 Marfan’s syndrome is a systemic connective tissue disease that is inherited. It is characterized by abnormalities of the skeletal, cardiovascular and ocular systems predominantly. It also can involve the eyes and lungs. It is a disease that there must be a keen suspicion of based on the physical findings, as there is no specific test for the disorder. Genetic testing can implicate the particular abnormality, but no laboratory test supports the diagnosis in questionable or milder cases.

Most people affected with Marfan’s are tall, with particularly long arms, legs and digits (a condition known as arachnodactyly). What makes Marfan’s a more difficult diagnosis though is the variability in which the findings can occur. There is a high arched mouth palate and an anterior chest deformity, such as pectus excavatum. Joints can be very lax and almost “too” flexible, and dislocation is quite common. Ectopia lentis (dislocation of the ocular lens) and severe myopia is present in about half the cases. Retinal detachment is not an uncommon presentation.

Cardiovascular complications are the most critical in Marfan’s. Mitral valve prolapse (floppy valve) is found in more than four out of five presentations. Dilation (widening) of the aortic root is a classic and dangerous finding: It may lead to a leaky aortic valve and also to aortic rupture. The progressive dilatation of the aortic root causes valvular insufficiency and is one of the leading causes of sudden death in people afflicted with Marfan’s. Family history helps to develop the diagnosis in questionable cases, but there needs to be characteristic features in the skeletal system, two other organ systems, and one of the major criteria of lens dislocation, dilation of the aortic root, or aortic dissection.

Laboratory findings are generally absent in the disease. Mutations in the fibrillin gene (FBN1) on chromosome 15 is the commonest presentation when genetic testing is done, but it is not always found in that defects in fibrillin itself without genetic findings may also occur. Other genetic conditions that cause aortic aneurysm and dissection can also be confused with Marfan’s, and there is no predictive value in the eventual prognosis of the disease for any of the genetic findings.

The complications of Marfan’s, as mentioned, are the biggest problem in underwriting it. The affectation of the mitral valve and aorta are critical, as sudden death may be the first presentation in those affected but not yet conclusively diagnosed with the disorder. Scoliosis is found in more than half of cases, ectopia lentis is almost 80 percent and some cardiac complication in almost nine of ten with the disease. These often are significant before the age of 50 and quite often by the age of 40.

There is no treatment of Marfan’s except for early recognition of the disease and careful monitoring for complications. Annual echocardiograms are done to assess heart size, aortic root size, and valvular function. Medication can be given to delay aortic complications. Prophylactic surgery and replacement of the aortic root may be done when the aortic diameter reaches a critical measurement. Women affected with Marfan’s must be monitored carefully during pregnancy and sometimes valve and aortic root surgery may have to be done before a pregnancy is undertaken.

Marfan’s has all degrees of severity, and as such some cases are insurable. Those who do not have cardiac involvement, are watched regularly and under a physician’s care and who have a normal echocardiogram and blood pressure can be offered ratable policies. Those with cardiac findings are generally not offered insurance; untreated Marfan’s patients often die in their fourth or fifth decade of life from aortic or valvular complications. Prophylactic surgery, medication, and earlier diagnosis and intervention has prolonged life expectancy, but most importantly early suspicion and diagnosis allows Marfan’s to be recognized and worked with earlier, and those (along with those who have milder forms of the disease) have the best prognosis.